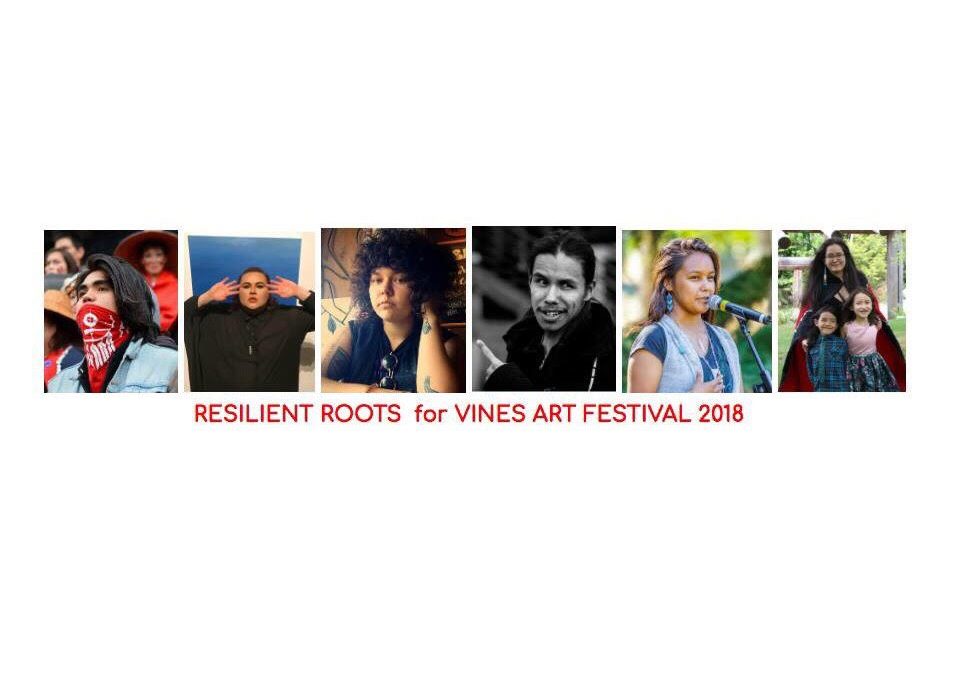 Resilient Roots is the heart of Vines Art Festival, bringing together emerging Indigenous artists who are also bearing their souls on the frontline grassroots movements, speaking out against the Pipelines and resource extraction, and combining art with activism – Artivism.

The Resilient Roots Project led by Senaqwila Wyss (Sḵwx̱wú7mesh Ethnobotanist), Heather Lamoureux (Artistic Director of Vines Festival), and Sara Cadeau (Anishnaabe Kwe, ceremonialist, singer, writer, maker of medicines and helper of people), is a commissioning project that partners Indigenous and non-Indigenous artivists to create a new work which will be performed at Trout Lake on  August 18. 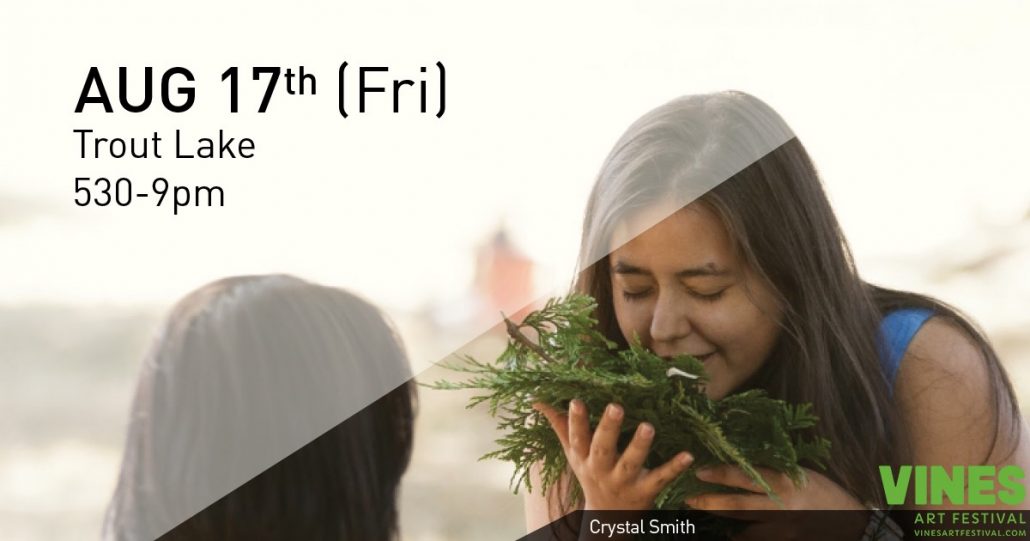 This year’s group is diverse and well spoken, with the emerging artists growing in their practice with the opportunity to work with an Indigenous mid-career artists to mentor them in creating a new, never-before-seen piece to be performed in the Finale of this summer’s festival on August 17th and 18th at Trout Lake Park! 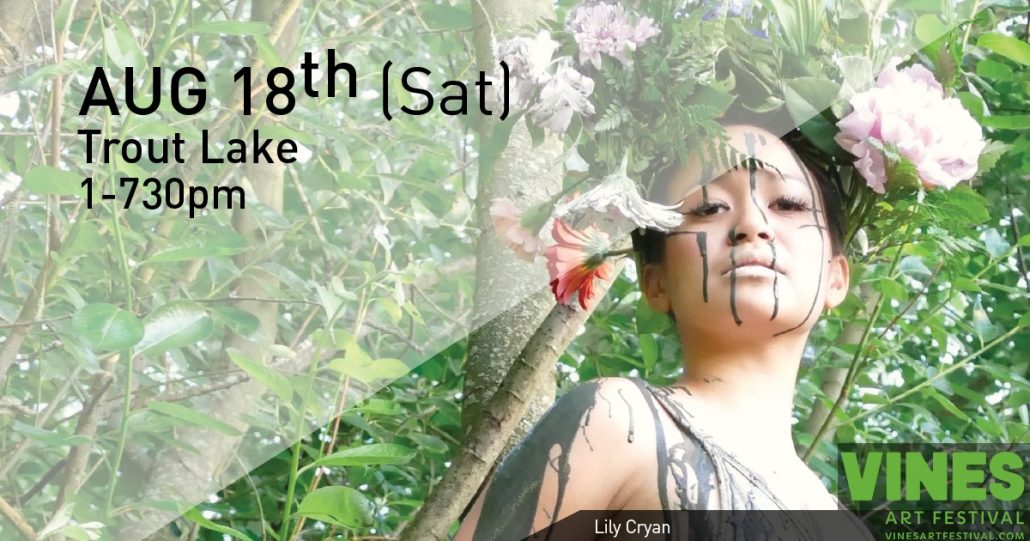 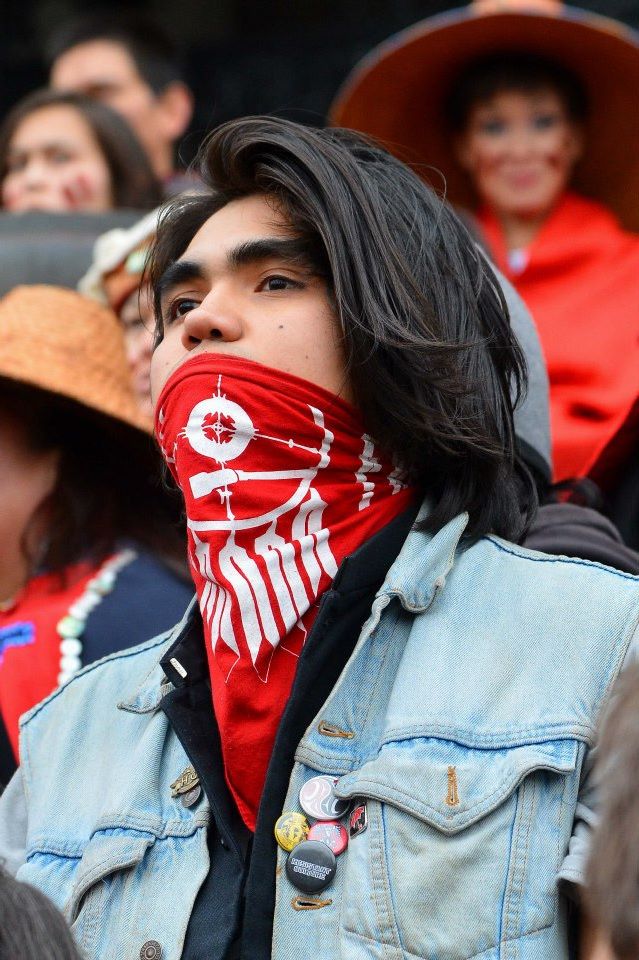 Alex Taylor McCallum
My name is Dzi-Kis-A-Way’ee. My Colonial English name is Alex Taylor-McCallum. I am Kwakwaka’wakw(Mamtagila, Namgis, Musgamagw Dzawadeneaux) and Nuu-Cha-Nulth(Heshquait and Mowachat). I am a writer, artist, singer and aspiring filmmaker. I have been deeply impacted by working with my Late Uncle Beau Dick (Walusgwayum), for making short films and carrying on my traditions as a Bakwam / Indigenous person. I want  to create work that will bring together our people from many cultures to create films around the different ways in which we are displaced, decolonization, solidarity and so much more. 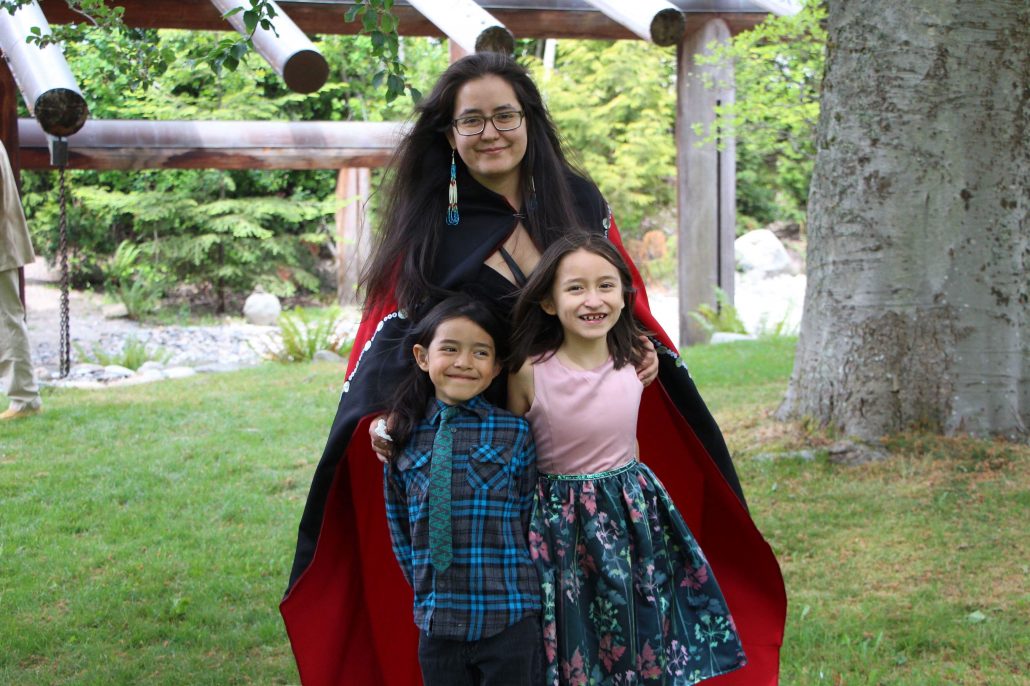 Crystal Smith
Crystal Smith is Tsimshian, Haisla and has been adopted into the Heiltsuk nation. She is a single mother of two beautiful children and is raising them to be proud Tsimshian and Haisla beings. She writes to bring awareness of the devastation colonialism is having on Indigenous peoples but more importantly the resilience and power of Indigenous peoples to engaged and uplift each other. She recently achieved her Masters in Educational Administration and Leadership with a focus on Indigenous leadership at UBC.

Jaye Simpson
jaye simpson is a Oji-Cree Anishinaabe Two Spirit warrior whose roots hail from the Sapotaweyak Cree Nation. jaye is a libra sun, sagittarius rising, scorpio moon but delusionally identifies as a scorpio since it’s all over their birth chart. jaye holds firm their rage about being a former youth in care, as well as a queer indigenous person and weaves it into poetry and prose. jaye explores the magic, intimacy and vulnerability they encounter as a healing creature amongst other healing beings. you can find them being awfully cliché in cafes on Commercial Drive and East Vancouver, they are in fact NOT writing screenplays, but sending important emails and trying to meet deliverables for several contracts. jaye held KPU’s Slamapalooza 2017 Champion and is now on Vancouver Slam Poetry’s Team 2018 heading to Guelph in the fall. they have competed across the country and have been nationally recognized, as well as published in Poetry is Dead’s issue Coven. jaye is a displaced indigenous person living, creating and occupying on xʷməθkʷəy̓əm (Musqueam), səl̓ilwətaɁɬ (Tsleil-waututh), and sḵwx̱wú7mesh (Squamish) First Nations territories.

Jaz Whitford
Jaz is an anti-professional, working as a street musician, slam poet and overall bad ass artist with a focus on decolonization and indigenous autonomy. they are a defender of the sacred and use their craft as a tool to decolonization and land sovereignty. they reside as a guest on unceded and ancestral territories of the xʷməθkʷəy̓əm (Musqueam), səl̓ilwətaɁɬ (Tsleil-waututh), and sḵwx̱wú7mesh (Squamish) First Nation peoples, otherwise and colonially known as Vancouver. they and their fire are from the Secwepemc nation of the south central interior.

Jaz has been presented by Vines Art Festival, Vancouver Verses Festival, Spartacus Books, Savage Society, Vancouver Poetry Festival and Vancouver Public Library. Jaz also sang with Arcade Fire in the 2018 Juno’s. They are in a mentorship with Sandy Scofield, creating their unique bluesy sound and they look forward to releasing their first album soon.

Mitcholos
mitcholos aka Łapḥsp̓at̓unakʔi Łim̓aqsti, is a nuučan̓uɫ poet living on stolen Coast Salish Territory, of the xʷməθkʷəy̓əm, Sḵwx̱wú7mesh & səl̓ilwətaɁɬ first nations. as a guest for 3 years and running, they believe ʔuusaḥiniš tiič č̓aʔak, they believe hishukish tsawaak, and they believe in iisaak. and thusly, stands in solidarity with tseil-watuuth first nations against kinder morgan pipeline. mitcholos was a Poet of Honor Rising Voice of Canadian Festival of Spoken Word 2017. and is now a Vancouver Poetry Slam team member representing vanslam for 2018-19.

Valeen Jules
Valeen Jules, also known as Kā’ ānni, is a determined young Indigenous warrior from the Nuu-chah-nulth and Kwakwaka’wakw Nations. A former foster kid, homeless youth and 1st-yr college dropout, she is now known as a political organizer, motivational speaker, youth outreach worker, spoken word artist, black snake killer and ”overeducated extremist” across Turtle Island. She released her first chapbook ʔiiḥmisic in July 2016 which has been used in the curriculum of a Humanities course at Emily Carr University.